The Union at the Westerly Hospital has navigated its way through the treacherous waters of receivership securing a brighter future for the hospital, its members and the community. In December of 2011, the Westerly Hospital went into receivership. Throughout that time, the Union has protected the terms of their contracts and service and employment levels at the hospital. This past summer the Union successfully negotiated new agreements with Lawrence and Memorial Hospital, a neighboring hospital based in New London, Connecticut that is seeking to purchase The Westerly Hospital. The agreements not only secure wages, benefits and working conditions, the agreements secure commitments to continue service lines and employment. Both the Union and The Westerly Hospital will maintain their respective identities and organizations. At the same time the new relationship with Lawrence and Memorial should strengthen the Westerly Hospital and put it in a better position to continue serving the community as an acute care hospital. Final regulatory approval is pending. 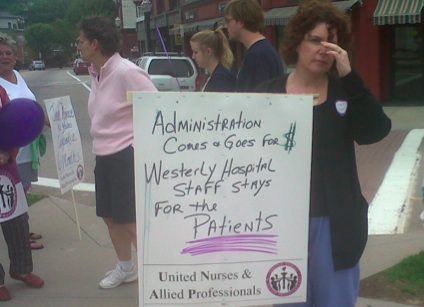 Westerly Hospital UNAP members are fighting back against their Hospital's reckless decision to layoff and reduce the hours of several dozen nurses and other health care workers.  Local presidents Jan Salsich and Judy Lawrence have been working tirelessly to protect the rights of their members since the Hospital announced the drastic cuts.  Local 5075 president Jan Salsich, RN, stated, "We are always concerned about patient care and safety.  These cuts are going to make it harder and harder for us to ensure that our patients get the best possible care.

Read these reports from the Westerly Sun: