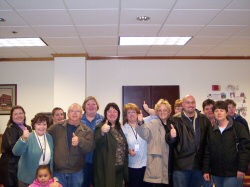 On Friday, January 27th, 2006 employees working in the adult services at Seven Hills Rhode Island (formerly the Homestead Group, and formerly the ARC of Northern Rhode Island) voted by a margin of 103-77 to organize a local union affiliated with the United Nurses and Allied Professionals.  Homestead is a not-for-profit human service agency providing supports and services for people with mental retardation and other developmental disabilities.

Jack Callaci, an organizer for the union said, "We believe that employees will now have the strength and the resources to achieve important positive improvements at the agency that none could achieve as individual employees."

Seven Hills employees have since adopted a constitution, elected officers and formed a negotiating team to negotiate a union contract with the agency. Union president Michelle Armstrong said, "We are pleased to have negotiated a contract that provides for an effective voice on the job, greater job security, legal rights, input into important decision making and improved pay."

Union supporters also recognize the important work that has to be done to build greater support for fully funding the important programs that Seven Hills employees provide. Such work will include coalition building in the community and increasing legislative awareness.